Table 1: BBR Test Results for Asphalt Binder Blends with and without Rejuvenators at 4% Inclusion 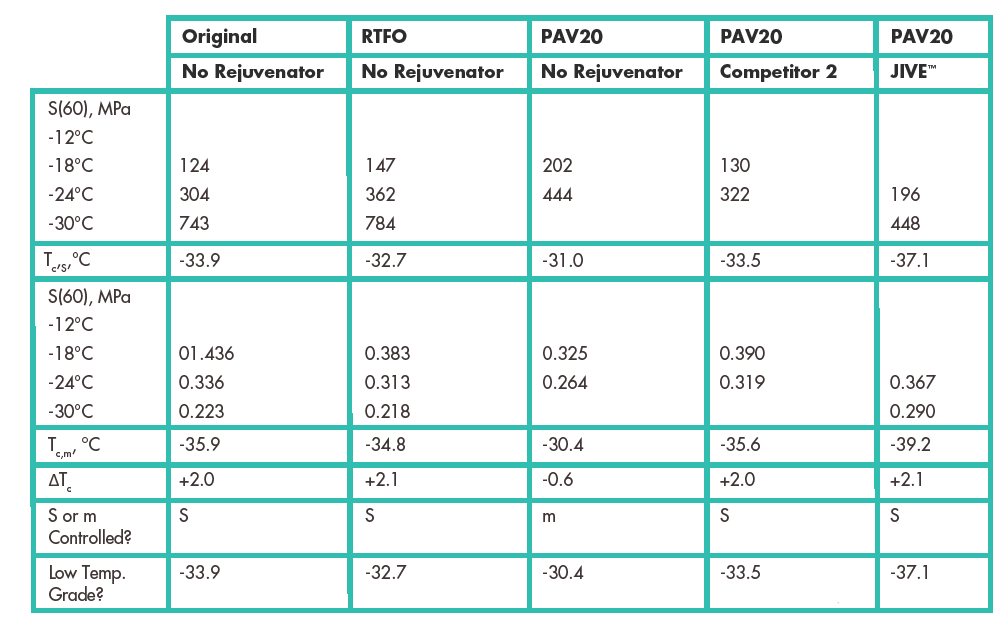 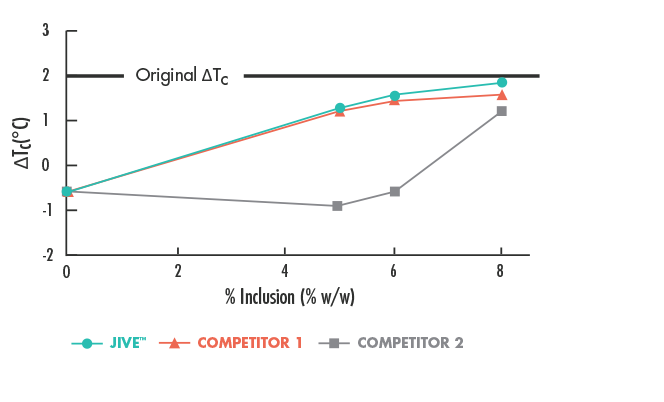 The difference between the continuous stiffness temperature (ΔTc,s) and continuous relaxation temperature (Tc,m) measured by the bending beam rheometer (BBR) test is identified as ΔTc. As asphalt is aged the ΔTc parameter decreases, indicating a reduction in asphalt durability. As shown, aged asphalt binder was mixed with either JIVE or a competitor rejuvenator at 5%, 6%, and 8% inclusion. Results indicate a dose-responsive increase in ΔTc with JIVE indicating better relative durability than the blends with the competitor rejuvenators. The ΔTc of the aged asphalt (0% inclusion) had a value of -0.6°C. The ΔTc of the asphalt prior to aging is plotted on the graph with a value of +2.0°C. 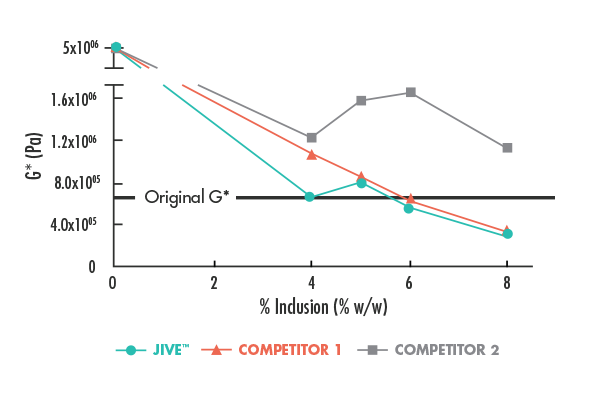 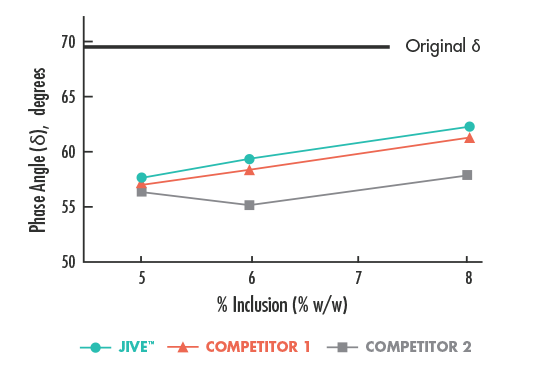 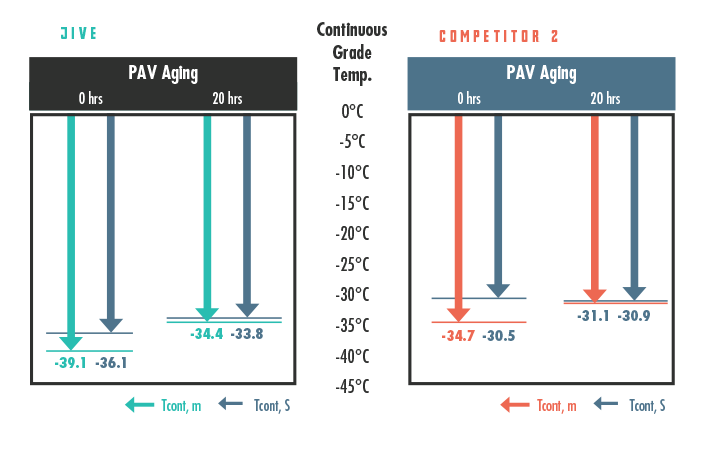 Figure 4 illustrates the effect of aging on the low-temperature properties while rejuvenators are present during PAV20 aging. The continuous grade temperatures, stiffness (Tcont, S) and relaxation (Tcont, m) temperatures, before (0hrs) and after PAV aging (20 hrs), are plotted for both JIVE and Competitor 2. Competitor 2 is a petroleum oil-derived rejuvenator, whereas JIVE is a corn oil-based rejuvenator. This data demonstrates that much like petroleum rejuvenators, the inclusion of JIVE to asphalt does not negatively impact the aging process. In addition, JIVE offers better low-temperature improvement relative to Competitor 2.

In order to evaluate JIVE as a rejuvenator in asphalt mixes, various mix tests were carried out to evaluate its efficacy. Initial binder studies indicated that a typical 50% RAP mixture would benefit from the inclusion of 8% JIVE based upon the weight of the recycled asphalt binder in the asphalt mixture. Results from asphalt mixture tests including I-FIT, Overlay Tester, DCT, and Hamburg wheel-tracker, are shown below. Asphalt mixes tested include no RAP (virgin), high RAP content (50% RAP), and high RAP with 8% JIVE (50% RAP + JIVE). 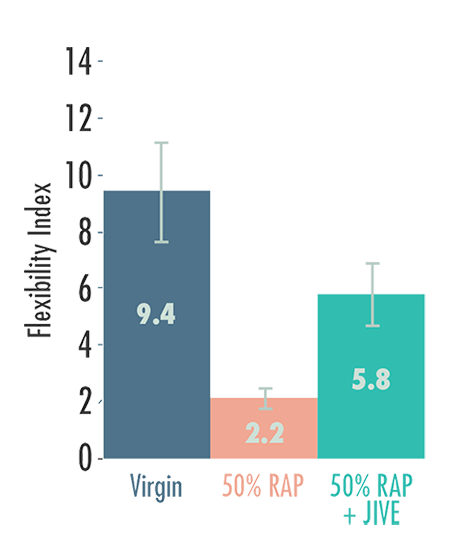 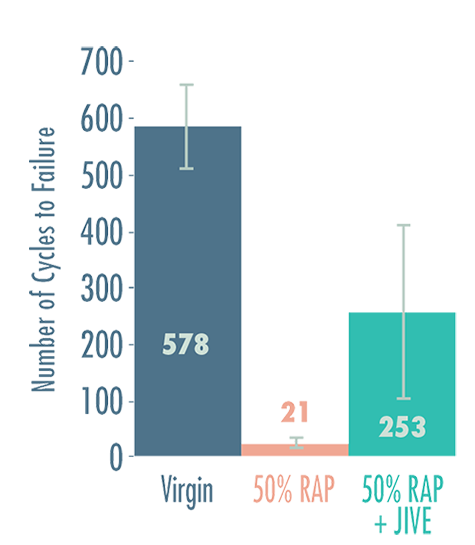 The number of cycles to failure as measured by Overlay Tester is shown in Figure 6. The test was run using a fixture and software within the IPC Global® Asphalt Mixture Performance Tester (AMPT). Data was collected at 25°C from four replicates from each sample while excluding outliers based upon ASTM E178 specifications. Inclusion of JIVE significantly increases the number of cycles to failure, indicating better fatigue and reflective cracking resistance at intermediate temperatures. 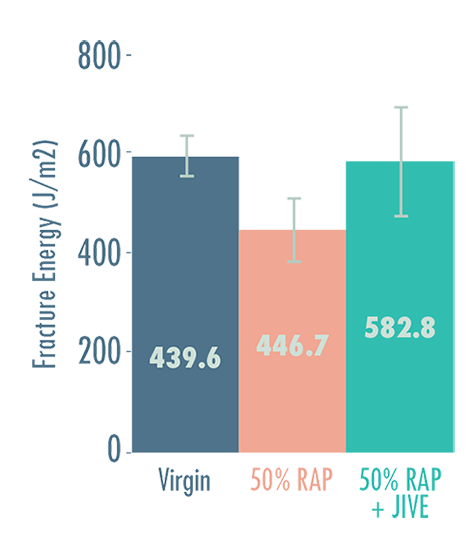 Figure 7 plots the fracture energy measured by the Disc-Shaped Compact Tension Test (DCT) comparing various asphalt mixes. Data was collected according to ASTM D 7313-13 at -12°C from four replicates while removing outliers based upon ASTM E178 specifications. The results indicate that inclusion of JIVE in a 50% RAP mixture can improve low temperature cracking resistance. 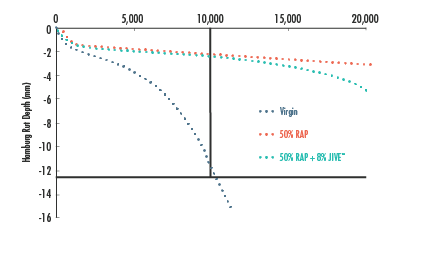 Figure 8 shows the rutting susceptibility of asphalt mixes containing high levels of recycled asphalt with and without 8% JIVE compared to virgin mix. Data was collected by Hamburg wheel-track testing according to AASHTO T 324-14 from four replicates. The specification of 12.5 mm after 10,000 wheel passes is labeled on the graph. As shown, the inclusion of JIVE at 8% inclusion does not over-soften the 50% RAP mixture and therefore does not facilitate excess rutting in the rejuvenated mixture.

Effect of JIVE on TSR and IDT Results

In order to evaluate the moisture susceptibility of asphalt mixes without any added antistrip, indirect tensile strength (IDT) before and after conditioning was evaluated in accordance with AASHTO T283. Figure 10 shows the resulting tensile strength and tensile strength ratio (TSR) of both unconditioned and conditioned asphalt mix samples of virgin, 50% RAP, and 50% RAP with 8% JIVE. The results demonstrate that moisture resistance is significantly improved with the inclusion of 8% JIVE in comparison to both the virgin and 50% RAP mixtures. The effect on stripping is illustrated in the images of specimens in Figure 11. The results indicate that JIVE appears to have antistrip capacity by improving moisture resistance and reducing the asphalt mixes susceptibility to stripping. 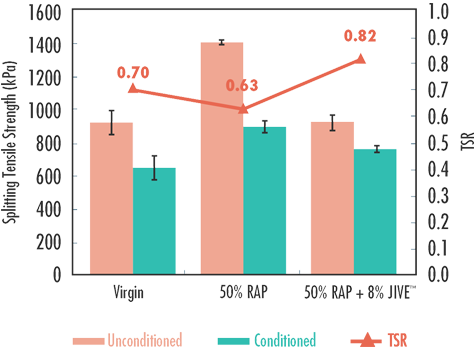 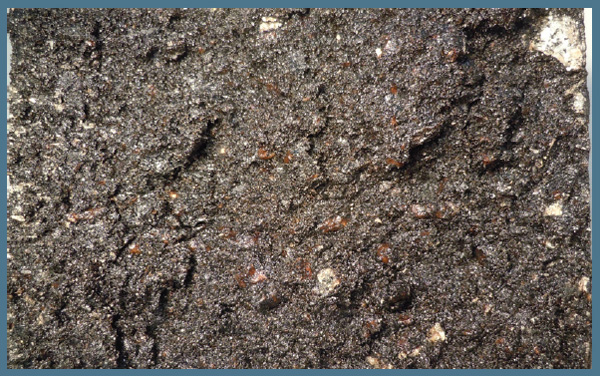 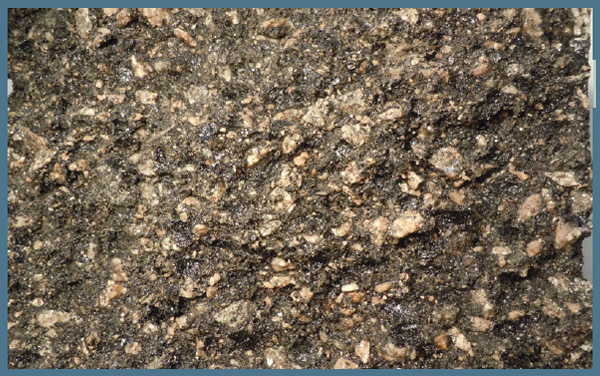 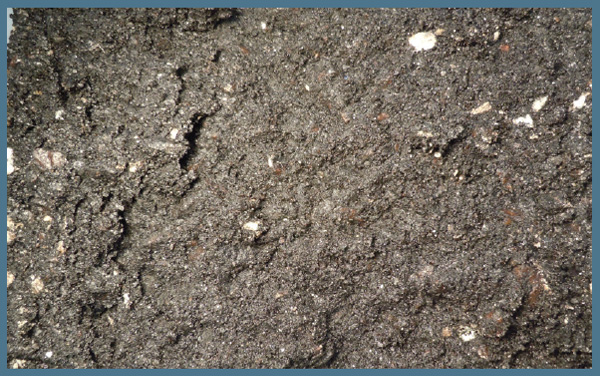 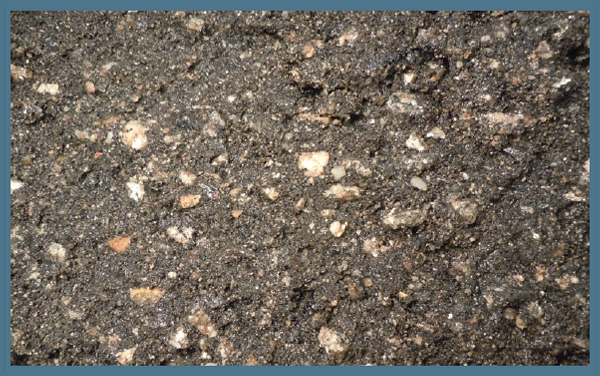 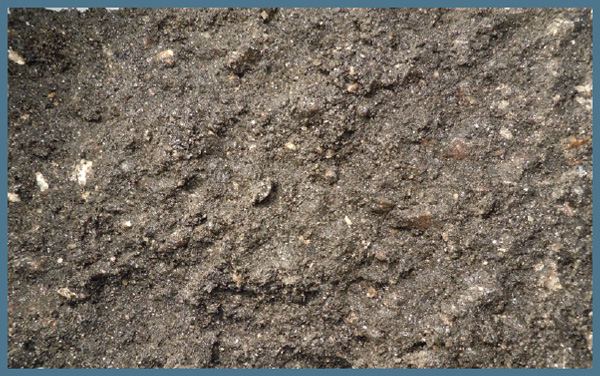