Biofuels are the Key to Long-term Successful Agriculture

With challenges like unpredictable weather patterns, international trade wars, regulatory uncertainty at home and now a global pandemic, to say it is harder than ever to be an American farmer would be a vast understatement. It is even harder to be a profitable American farmer.

The United States Department of Agriculture (USDA) forecasts high carryouts that have been steadily growing since the farm crisis of the 1980s.

This surplus grain is not due to expanding agricultural fields. Farmers are simply producing more on existing land. Innovation in farm equipment, products, and technology has enabled yields to continue to increase, year after year. In a healthy market, increasing yields would be a good thing for farmers. However, the USDA also forecasts a drop in the year-average corn price.

With record-low prices and ever-increasing carryouts, the outlook for agriculture appears grim. Without strong markets, farmers are operating at a loss, defaulting on loan payments, or making the difficult decision to get out of the industry altogether. How are American farmers, who are arguably the backbone of our economy, supposed to make it, much less thrive in these conditions? It may be difficult now to imagine, but think about what the world could look like with a successful, profitable domestic agriculture industry and the ways biofuels can help achieve this critical goal.

Plants like corn soak up carbon dioxide from the atmosphere and store it in the plant above and below the ground. By incorporating a few existing technologies and practices, agriculture in the U.S. today has an enormous potential to become a carbon sink.

Low-till, no-till and ridge-till farming leave crop residue in the fields after harvest and increase the soil’s carbon content. The heavy residue cover protects the soil from erosion and provides an excellent environment for soil microbes and earthworms, who take the leftover carbon from the surface and incorporate it deep into the soil. These practices, along with planting cover crops, precision farming and other techniques that reduce soil disturbance, all improve the carbon sequestration capacity of the soil. They also help to restore and protect soil health, which allows farmers to use less fertilizer and provide the same amount of nutrients to their crops.

If agriculture is successful, farmers have the ability to invest in these practices that can help reverse the devastating effects of climate change. According to the U.S. Farmers and Ranchers in Action (USFRA), American farmland stores 100 times more carbon than the U.S. emits every year, so very small improvements in agriculture lead to major improvements in environmental health. However, without a margin in agriculture, farmers don’t have the means to invest in these practices. Expanding markets will ensure the incentives for ever-improving agricultural practices.

In a presentation to the House Select Committee on the Climate Crisis, Jennifer Moore-Kucera, the Climate Initiative Director at American Farmland Trust, said that no-till and limited tillage on 201.5 million acres of farmland in the U.S. have reduced carbon emissions between 59.1 and 70.8 million metric tons each year. In addition, cover crops planted on 15 million acres have the potential to eliminate between 4.2 and 6.2 million metric tons of carbon dioxide emissions annually. That’s the equivalent of taking over 1.3 million passenger cars off the road each year.

In addition to practices limiting soil disturbance, precision agriculture technology may have the greatest potential to help address climate change through farming. One of the main sources of GHG emissions in agriculture is the production and transportation of fertilizer. Improving fertilizer efficiency through practices like precision farming can reduce nitrous oxide emissions. Precision agriculture uses GPS and satellites to allow farmers to plant, water and fertilize their crops to a half-inch accuracy measurement.

The USFRA also estimates that using technology available today, the agricultural industry is on a trajectory to reduce its GHG emissions by 50%. By harnessing further innovation and investment, agriculture has the potential of up to 147% reduction in sector emissions.

So what will it take to harness this untapped potential? We need agriculture to become profitable again. Without profitable agriculture, farmers are merely trying to stay afloat. COVID-19 relief policies included checks to farmers to compensate for a drop in demand brought on by the pandemic. This certainly provided much-needed support and helped many avoid unimaginable economic circumstances. But it was a temporary solution to a long-term problem.

Demand destruction caused by the pandemic may be the latest challenge farmers are facing, but it’s certainly not the first time the U.S. government has provided economic relief for farmers to get by. For generations, yields have outpaced demand for grains, which has led to overproduction. In turn, grain values have continued to be below the cost of production. With little to no margin in agriculture, the U.S. has continued to subsidize farmers just to break even. This leaves no room for farmers to invest in existing and emerging technologies to create a better, healthier environment. These subsidies also cause a global challenge that leads to increased poverty.

If U.S. farmers can’t make a profit in agriculture, how is the rest of the world expected to farm profitably? By subsidizing U.S. grain farmers, the world has been flooded with cheap, below-market grain and global agriculture systems have been stifled. The U.S. is the top corn-producing country in the world by far. We have subsidized farmers to produce the most on what they have without profitable markets for their yields. Instead, surplus grain gets sent around the world and discourages other countries from developing and building out their own agricultural industries. Impoverished farmers in developing countries cannot compete with this influx of cheap grain. The potential for agriculture worldwide is virtually untapped, because for generations (with few exceptions) there has been no margin in agriculture. If we balance grain production with demand, agriculture will flourish and provide solutions for climate change, poverty, hunger and disease.

This is the proven way biofuels can help solve global poverty.

When biofuel grew from 1% of the U.S. fuel supply to 10%, U.S. farm incomes increased dramatically between 2000 and 2012. Total gross farm income grew from $241.7 billion in 2000 to $483.8 billion in 2013. At the same time, agriculture flourished around the world, and over 1 billion people were lifted out of extreme poverty. During this timeframe, demand for corn, soybean and wheat remained steady with the exception of the biofuels sector. 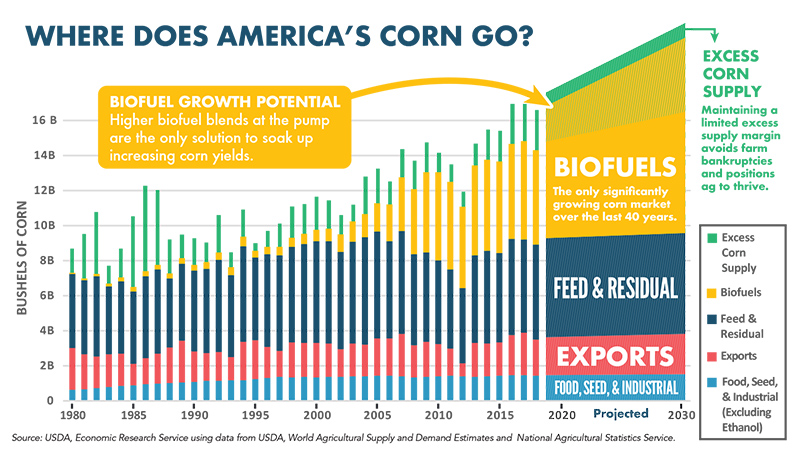 As the domestic market for corn from the biofuels industry grew, it soaked up enough surplus grain from 2000 to 2013 to balance the commodity markets and help make agriculture profitable. Unfortunately, since the biofuels market stopped growing in 2013, yields have continued to rise, values have declined and farm incomes have been cut in half.

Strong biofuel markets can also help address global hunger. Without growing domestic markets for increasing corn yields, the U.S. will continue to flood the global market with cheap corn. Cheap grain does not equate to more abundant, affordable food. Just the opposite.

When markets are flooded with surplus crops that are sold below the cost of production due to farm subsidies, it depresses world prices. Countries that cannot afford to subsidize goods are essentially shut out of world markets, devastating their local economies. Traditionally, agriculture is the pillar of a developing economy because it provides food security, generates local capital and creates jobs. If developing countries had a profitable market for their agricultural commodities, they too could invest in infrastructure which would allow them to move beyond sub-subsistence farming and into profitable agriculture to feed their families and communities.

Farmers need to make a profit off their products, and to do so, they need strong markets. At POET, we’re working on getting higher blends of ethanol into the marketplace so that our industry can grow right along with increasing yields. Currently, the biofuels industry purchases around 40% of the U.S. corn crop, producing clean, affordable fuel, nutritious feed for livestock and many other critical products. This is a critical market for grain, and it needs to expand with ever-increasing yields to balance the market. If the U.S. increased ethanol in the fuel supply from 10% to 15% nationwide, it would result in a market of almost 2 billion bushels of additional corn demand for the American farmer. This would provide the economic incentive to encourage farmers to employ the latest practices that will help heal the world.

Federal programs like the Higher Blends Infrastructure Incentive Program (HBIIP) and the USDA’s Innovation in Agriculture Initiative signal that policymakers understand that biofuels are the key to insulating and building up our markets for domestic agriculture. These programs will expand access to higher biofuel blends to more consumers.

But we can’t stop there.

Learn more about E15
and tell your legislators to support higher blends of ethanol.